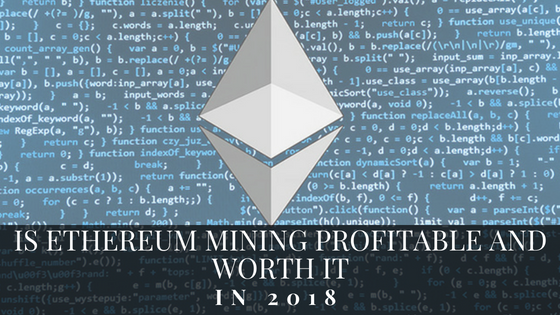 Is Ethereum Mining Profitable and Worth it in 2018?

As you must be aware that the price of ethereum is quite high and you may wonder whether it is worthwhile to mine. The ethereum is a proof of work coin such as – Bitcoin and uses miners to confirm network transactions. The degree to which the mining yields profit varies from person to person and is bound to change over time. As the coin matures, it usually becomes less profitable.

Factors on which the ethereum mining depends:

Since cryptocurrency mining that also includes ethereum and bitcoin, has become very tough for the miners to make a profit. There are a few factors that are needed to be considered while you begin with the ethereum mining operation. These statistics include the coin network’s current difficulty, mining hardware hash rate execution, as well as the electrical costs associated with the mining.

The term hash is defined as the mathematical problem that a miner has to answer. Whereas the rate at which the miner solves the problem is known as the hash rate. As the number of miners who are joining the ethereum network increases the GPU’s, ASIC’s, and CPU,s that are available for mining get better providing an enhanced hash rate.

You know that huge amount of power is required to support the machines and their calculations. That is why there are very powerful computers running to solve these complex problems related to electricity. So, when calculating the ROI (Return on Investment) in mining, the cost of power should be factored. As the price of ethereum is rising, more and more miners are joining the network. More the number of miners, means higher the hash rate, but the mathematical problem becomes more complicated. If a pc takes a lot of time in calculating a single calculation and receiving only one block of ether, more power is consumed.

In most of the cases, the amount of electricity consumed is very high, thus making the ethereum mining unlucrative. On the low end, the miners usually draw 100 Watts at their maximum load, but it can increase up to more than 1000 Watts with more powerful and less efficient miners. In addition to this, there are various services which allow you to calculate your power cost per day and compare that to the estimated return per day while choosing a miner-My Crypto Buddy, CryptoCompare, and Coin Warz.

The mining difficulty is defined as the measure of how difficult it is to find the answer to the mathematical problem. The ethereum network is designed in such a way, to produce a consistent amount of coins every few minutes. The mathematical problem tends to get more and more complex to solve as the overall hash rate of the computer rises.

Is it worth it?

This is a consistently asked question, especially when the price of ethereum is increasing rapidly. This increase has led individuals who hadn’t considered cryptocurrency to become extremely interested in it.

Author: Varun Datta is a highly experienced professional and the owner of a well-known company, 4New Ltd. He plans to leverage his in-depth knowledge in ethereum and bitcoin in order to revolutionize industries.