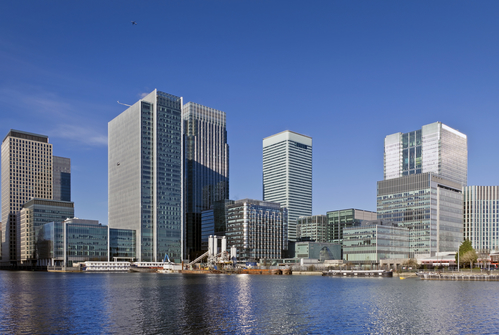 HSBC bank offers a variety of financial services to its numerous customers around the world. HSBC bank has numerous building throughout the world but has its main headquarters in Canary Wharf, London.

The bank owes its name to The Hongkong and Shanghai Banking Corporation Limited, the founding member of the bank. The corporation was founded in 1865 as a financier for the increasing trade between Europe and China. The bank moved its headquarters from Hongkong to the UK in 1993 to better meet the needs of its growing clientele. Besides, London is a strategic location and a financial hub for international businesses.

Their HQ at the time did not fully accommodate all their staff who were scattered all over London. This arrangement was not efficient, and after much deliberation, the bank decided to commission a building that would serve as its official headquarters in London. The selected architects were Foster and Partners, and construction of the building began in 1999 after two whole years of deliberation of the options available to the bank.

The bank chose the location for construction because of the space available in Canary Wharf at the time.

The HSBC Bank HQ in Canary Wharf was completed in 2002 at the cost of approximately 500 million pounds and officially launched in 2003. At the time, the 45 story building was one of the tallest buildings in the UK standing at 210 meters. Currently, HSBC Bank in Canary Wharf also referred to as 8 Canada Square is the 6th tallest building in London. The building does, however, remain one of London’s biggest offices building occupying a floor area of 1,769,700 square feet. The building has 42 of its stories above ground and they house;

The top floors boast of a spectacular 360-degree view of London, a lot of people can never seem to get enough of.

Personally, I would recommend that you visit the restaurant on the top floor if you are a big fan of fantastic views of London.

The HSBC building is adjacent to the Canary Wharf Tower, Citigroup Centre and the Bank of America among others.

To manage its assets effectively, HSBC bank sold the building back in 2007 in what was the largest property deal ever in the UK. The building was sold for one billion pounds to Spain’s Metrovacesa who paid for a lease valid for 998 years.

Previously, the highest property sale stood at 600 million pounds. HSBC retained full occupancy of the bank which leased the building for 20 years at an annual rent of 43.5 million pounds and the option for renewal for five years. HSBC bank took back the ownership of the building in 2008 stating that it had made a decent profit from that transaction.

The sale and purchase of 8 Canada Square coincided with property booms in the UK. Both parties always manage to make a lot of profit from the transaction.

The 153-year-old bank planned to move its headquarters from the UK where it had been since 1992 because of increasing costs and strict operation regulations but decided against the move after a deliberation process that took ten months.

The bank also wanted to move its headquarters because of the foreseeable effects of the UK leaving the EU. As had been predicted by different economists, the move by the UK to leave the EU would encourage large companies to move from the UK to protect their businesses.

Their 2016 decision to stay was partly influenced by the adjustment of taxation on banks that conveniently worked in favor of HSBC. As a result of the adjustments, levies would not apply to British banks’ assets located overseas, a serious bone of contention for the bank. Nonetheless, the bank is still taking measures to protect itself against the regulatory changes anticipated to rise from Brexit.

Only the future can tell if the bank will move its headquarters from the UK or who the next owner of the building will be.

What is certain is that the building is highly valued and sought after. We can only hope that the price tag stays as it is or increases because that is a good indicator of the high worth London still commands globally as a financial capital.